My Postpartum Saviors: AKA the Moms' Group 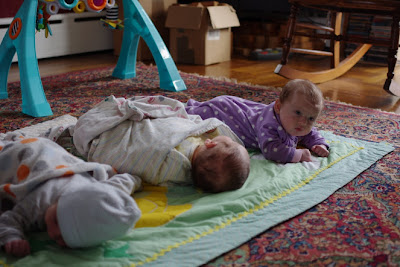 Photo by Sarah from my group

Things are usually very busy with my work in March and April and my social calendar suffers for it, but this time last year I was in total hibernation mode. I had just discovered that I was pregnant and I didn't want to tell anyone this news for fear of jinxing things. But how to find social support during and following pregnancy was a subject that dominated my thoughts even back then. Early into pregnancy I quietly lamented the fact that none of the people in my immediate (i.e. local) social sphere were planning to be (or already were) in the family way. It was a selfish gripe, for sure. But I was dying to confide and commiserate.

Thanks to the brave new world in which we live, I found some camaraderie via semi-private, semi-anonymous online messageboards. They provided an outlet to discuss pregnancy in a seemingly low-risk manner. Should things go south for any reason my secret was still largely safe. Even so, I longed for local buddies.

Pregnancy made me feel alienated in a lot of ways because it is so individual. I felt like I was the only person embodying this specific experience, since pregnancies vary so widely. Viscerally and emotionally, the transitions and anticipation and worry and symptoms were mine to manage. Sure, I could describe them to others but I was the only person living them, 24 hours a day. Meeting other pregnant women "in real life" was difficult but my desire to do so made me overly eager. Whenever possible, I would make eye contact and smile at any other obviously pregnant women (so long as they appeared with hand on the belly, aka the "tell") I spotted. But transitioning from casual "so, when are you due?" chit chat to a fully fledged "lets meet up and be FRIENDS!" request felt impossible! Even getting to the casual chit chat stage was hard.

I wrote in this space about how much I enjoyed my Lamaze class but regretted that the condensed format decreased our chances of making friends with other parents-to-be. And although a few of my girlfriends became pregnant over the course of my own pregnancy, all of them lived far away from Pittsburgh. By late November, I had accepted that I'd likely have to hunt for local preggo comrades via meetup.com or Babycenter's Pittsburgh community. But when I began digging, it was hard to find a group where I thought I'd have more than just "motherhood" in common with the members.*

It was important to me to seek camaraderie with women who I could relate to, that were politically progressive (and hopefully feminist), perhaps a little crunchy, non-judgmental, open-minded, supportive (rather than competitive), and (at least some who were going to be) working.  It was a tall order. And with every passing day I was beginning to lose hope.

By the time E was born (10 days early) I felt like my opportunities for commiseration and venting with new moms would be relegated to online communities. It wasn't until my incision check (which occurred on my December 5th due date) that I caught a glimmer of hope.

December 5th was a heavy day for me. It was the day I was due. It was to be my last day of classes for the term. I was dealing with end of term stress, as I tried to administer final assignments and evaluations remotely. All while recovering from major surgery and taking care of my newborn daughter. My upset over Emilia's birth and the treatment I received by one midwife in particular were weighing on me. I knew I had to bring it up to feel a sense of closure about the situation. Knowing that I needed extra support that day, both Chris and my mom came along. My mom watched the baby while Chris accompanied me to the exam room. I wanted to be strong but I sobbed as I voiced my disappointment. I was a mess but it felt good to get it off my chest.

By the time it was over I was emotionally spent and felt physically nauseous. I can't even imagine how I must have looked. As I was leaving the office, I had to go back through the waiting area to schedule my 6 week check up. After I did, a woman named Sarah approached me and introduced herself. She said recognized me from my personal style blog and wanted to say congratulations. She was waiting for her own appointment but for prenatal care. And she was adorably pregnant with her second child. A boy! She was due in a few weeks. She said she first recognized my dress (thank goodness I wore that dress to the appointment) and then realized it was me.

I was frazzled as hell but so eager to meet someone who 1. reads my blog and 2. is a mom with baby number 2 on the way. Just as I was on the cusp of making my very first mom friend since becoming a mom myself, she was called into her appointment. I pleaded that she email me and probably sounded a little unhinged in the context of my frazzled state. Thank goodness she did anyway! That night she said she was thinking about organizing a moms' group. She said she had done it the first time around and found it to be really helpful. I told her I would LOVE to be included. And now five of us meet weekly with our babies. I feel as though I am a better mom and a better partner on the days when I hang with these moms and babies.

We sometimes cry a little. We always laugh. We often find ourselves offering advice and usually commiseration. It is a sympathetic, fun, funny, candid, intelligent, and accomplished bunch. I feel so grateful to know these women. I learn so much from them! I can honestly say that I not only love our group, but I truly have needed these meetings. I lean on these women when I have darker days and I think about them and their babies during the week, wondering how things are going. Pittsburgh is a big small town but I was still surprised by how connected we already were once we got to know one another. It was so serendipitous to have met Sarah that day!

For all of these reasons, I cannot recommend enough that new-moms-to-be seek support, commiseration, friendship, and venting opportunities with others. Although the advice I've received from moms at all stages has been invaluable to me, speaking with new (and also mostly first time) moms who are in the newborn trenches is so so so validating. So legitimizing. So calming. So ... wonderful! I have grown so fond of these women and their babies. I love seeing how the babies change with every week. And I love that I've found friendship and empathy with a group of such smart, thoughtful, kind, and inspiring ladies.

*Having thought this initially, Sarah recently and wisely pointed out that motherhood encompasses so much on its own. It can be so all-consuming. Even if we hadn't found a group of women with whom we share many other commonalities beyond motherhood, I am sure we'd have plenty to discuss. In other words, don't get hung up on finding the perfect group! The most important variable is being able to discuss your experiences in being moms.
Posted by Jesspgh of Consume or Consumed at 11:05 PM No comments:

Jesspgh of Consume or Consumed
I'm a junior professor on the tenure track, navigating marriage and motherhood. I blog about life, clothes, and shopping. Questions? Comments? Partnership inquiries? Email me at jesspgh@gmail.com